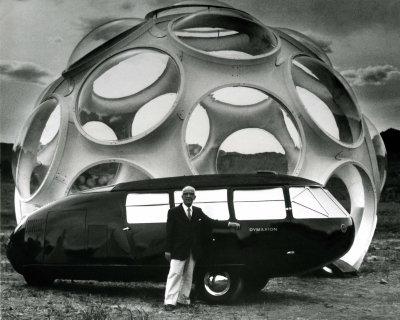 Architect, designer, and evolutionary strategist, Buckminster Fuller spent his life in pursuit of designing a world  “that works for 100% of humanity in the shortest possible time through spontaneous cooperation without ecological offense or the disadvantage of anyone.” He practiced an approach to creativity and design that was comprehensive, anticipatory and aligned with nature’s fundamental principles.

In 1961 Fuller filed the patents for an autonomous dwelling machine he called the “Fly’s Eye Dome.” It was envisioned as a fully functional, air deployable, off-the-grid shelter. Though never fully realized in his lifetime, Fuller created three prototypes – a 12, 24 and 50 foot dome. A historic restoration of the 24 foot dome was recently completed in Bristol, RI.

Equally important was Fuller’s Dymaxion car. This ‘omni-directional transport system’ (patent 1937) was intended to fly, jump-jet style, when suitable alloys and engines became available. Three cars were produced in Fuller’s lifetime.   Renowned contemporary architect Lord Norman Foster recently reconstructed Fuller’s Dymaxion Car in England – Dymaxion 4.  For Foster, the re-building of the car “was a mixture of curiosity and a desire to pay homage to Bucky’s ideas that have helped shape my own life.”

The Architecting the Future: Buckminster Fuller & Norman Foster exhibition brings together for the first time in decades these two iconic inventions. On display in the Miami Design District will be the restored 24 foot dome and the reconstructed Dymaxion 4 car. The exhibition is sponsored by Miami Design District Associates and curated by Daniel Reiser and Elizabeth Thompson.

The 24 foot dome is a part of the Craig Robins Collection.  It will be installed in a pedestrian plaza currently being developed in the heart of the Miami Design District.